What is Deep Tech?

…and why you should care

Deep tech is the next big thing. It promises solutions to the biggest problems the world faces today. According to research from Boston Constulting Group (‘The Dawn of the Deep Tech Ecosystem’, March 2019) in 2018, nearly $18 billion was privately invested in deep tech companies around the world, and this interest shows no signs of cooling off. BCG confirmed that investment in deep technology increased by over twenty percent every year to 2018, since 2015. Innovation based on genuine scientific advances, named after the long term research and ‘depth’ of expertise they’re built on. Deep tech companies are disruptive because they have the power to create new markets. The Boston Consulting Group highlights three characteristics of deep tech start-ups: the potential for a big impact, the need for longer timescales, and higher levels of investment.

What are the deep tech sectors?

• Photonics & electronics – light generation, detection and manipulation, and its integration with electrical systems for sensing and communications.

• Drones & robotics – automated and intelligent machines with increasing capabilities in surgery, home maintenance, delivery, and many other sectors.

• Advanced materials – the design and discovery of materials with new properties, such as superconductors that power magnetic levitation trains in Japan.

• Quantum computing – quantum theory describes the universe at (sub) atomic scales, and its key findings can be applied to the design of faster and more secure computers.

While the term deep tech is ‘purposefully vague’ because new technologies are emerging all the time, some sectors our outlined above.

But what is it, and why should you care? How will it affect the world you live in? In this article, we’ll answer those questions and look at three real-world examples of deep tech companies.

It’s important to distinguish between tech and deep tech. Most of the companies that come to mind when you think about Silicon Valley have been successful because they used existing technology to make new business models or move offline activities online. Spotify essentially ‘rents’ music to listeners so that they can access more music than they could afford to buy. Airbnb links people with spare accommodation to travellers looking for somewhere more interesting than a hotel. Neither of these companies made a technological leap, they found clever ways to reorganise people and resources.

‘This is good news because it means that the underlying intellectual property is well-defined and difficult to reproduce, providing a competitive advantage.’

By contrast, the foundation of deep tech companies is a scientific discovery. As Deutsche Welle puts it, most tech companies are ‘reinventing the wheel’, while deep tech ‘makes wheels obsolete’. However, deep tech is also riskier because more money is required for R&D, and the road to market is often longer.

Why is deep tech important?

Analysts predict that a fourth industrial revolution is underway. The World Economic Forum defines it as ‘a fusion of technologies that is blurring the lines between the physical, digital, and biological spheres’. Today’s deep tech companies are taking aim at global issues: our climate emergency, world hunger, and the future of healthcare for an ageing population.

We’ve lived through three industrial revolutions, each powered by the deep tech of its time:

• 1760-1840: Steam and water power allowed the transition from hand production to mechanised factories, leading to an explosion in population growth.
• 1870-1914: Steel replaced iron, allowing for the expansion of railways. Electrification and the petroleum industry enabled mass production. Living standards and public health greatly improved in industrialised countries.
• 1969-2010: Computers, the internet, and robotics have allowed the digitisation of manufacturing. Far less human labour is required to produce flexible, customisable products economically.

Investors have already started to take notice. The Boston Consulting Group reports that between 2015 and 2018, nearly $60 billion was invested across seven deep tech sectors.

Let’s take a look at three start-up examples to illustrate how diverse and disruptive deep tech start-ups can be. In each case, the journey from invention to product took a considerable amount of time, but it’s this long term approach that makes these companies so innovative.

Boston Dynamics are world leaders in engineering and robotics design. The company captured the public imagination with its series of YouTube videos of its creations, including:Cheetah, which can sprint faster than Usain Bolt’s world record pace, Atlas, a humanoid that can perform parkour, and SPOT, which can climb stairs, open doors, and stack dishwashers.

The videos tend to provoke a mixture of awe and terror in viewers. An episode of Black Mirror, the science fiction TV series, was inspired by Boston Dynamics and features murderous robot dogs that hunt down the last surviving humans. In July, a parody of Boston Dynamic’s videos imagined a robot fighting back against its testers.

Robots do jobs that are too dirty, dull, or dangerous for human workers. They are ‘man’s tools for a better and less mechanical life’. However, robots still aren’t mobile, perceptive, or intelligent enough for many tasks. These difficult design challenges are what Boston Robotics focus on.

The road to commercialisation has long been unclear for Boston Dynamics. This is often an issue for deep tech companies: because their technology is complex, it can be difficult to understand its value. Boston Dynamics’ robots are so advanced that they have the power to create new markets, so they’re leasing their first SPOT robots to development partners.

• 1992 – Boston Dynamics spins out of the Massachusetts Institute of Technology
• 2005 – The company creates BigDog, a four-legged robotic pack mule funded by DARPA. The robot is intended to accompany soldiers on rough terrain, and it can carry 150 kg at 4 mph on inclines of up to 35 degrees.
• 2013 – Google X acquires Boston Dynamics for an unknown price.
• 2017 – The company is sold to SoftBank Group for an undisclosed sum. 2019 – Boston Dynamics launch their first commercial product, SPOT.

Time from spin-out to product: 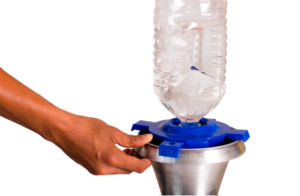 Folia Water is an advanced materials start-up based in New York. They make paper filters embedded with silver nanoparticles that kill bacteria in dirty water, providing access to clean water for pennies instead of dollars. TIME Magazine selected Folia’s technology as one of the 25 best inventions of 2015.

Worldwide, two billion people drink water contaminated by human or animal faeces. More than half of the developing world’s population is suffering from one or more diseases associated with unsafe water and poor sanitation. Every day, 6,000 children die of water-related diseases.

In 2013, founder Theresa Dankovich took her filter system around the world to test it against real contaminated water supplies. In South Africa, the team filtered water from a stream where raw sewage was regularly dumped and made it clean enough to drink. Folia spoke to local communities about their needs and refined their product accordingly. In 2014, they produced a book with 25 pages – each of which can be used as a water filter – with sanitation advice in local languages.

Folia’s filters have a tremendous potential impact, they could make clean, safe water available to all. Their technology is based on a large body of academic work, and during its development, genuine scientific innovations have been made.

• 2006-12 -During her PhD, Theresa Dankovich, now co-founder and CTO at Folia Water, designs a filter that can remove bacteria from drinking water.
•2013-16 – Dr Dankovich continues todevelop her filters and tests them in the field.
• 2014 – In partnership with WATERisLIFE, The Drinkable Book is launched.
• 2016 – Folia Water is founded as a for-profit benefit corporation.
• 2017 – Folia officially launches their product to consumer goods distributors in low- and middle-income countries.

Time from prototype to product:

Oxford Nanopore work at the interface of biotech, electronics, and chemistry. The company is one of only 77 tech unicorns (privately owned companies valued at over $1 billion) in the United Kingdom (Tech Nation Report, 2020).

Oxford Nanopore makes devices that can sequence DNA, the molecule carrying the genetic information that makes every living thing what it is. Scientists use DNA sequencing to understand diseases, evolution, agriculture, and crime.

DNA sequencing is slow, expensive, and requires specialist facilities. This makes it difficult for scientists working in dangerous or inaccessible places like jungles, deserts, and mountains. The expense is also a problem for researchers in low-income countries.

Oxford Nanopore’s MinION sequencer is the size of a USB stick and weighs just 100 grams; a competitor, the Illumina MiSeq, weighs nearly 600 times as much and is bigger than a microwave. The MinION also costs just $1000, compared to $100,000 for the MiSeq.

Oxford Nanopore’s mission ‘to enable the analysis of any living thing, by anyone, anywhere’ is as bold as it is disruptive. The growing ‘DIY Biology’ movement of amateur scientists wants to ‘hack’ biology in their own homes and make biotechnology open source to empower the public. Oxford Nanopore’s technology is making this possible and raising lots of awkward ethical issues.

• 1990s – Professor Hagan Bayley is studying alpha-haemolysin, the protein that will be engineered into nanopores.
• 1996 – Collaborators in the USA move single DNA molecules through nanopores. They recognise that ‘with further improvements, the method could in principle provide direct, high-speed detection of the sequence of bases in single molecules of DNA.’
• 2005 – Oxford Nanopore is founded to develop an electronic single-molecule sensing system.
• 2015 – Their first product, the MinION, is made commercially available.

Time from idea to product:

• Funding
• Market access
• Technical expertise
• Business expertise
• Access to facilities
• Talent Funding is the most important of these resources.

Because deep tech is complex, it can be difficult for investors to see the value of a start-up and carry out due diligence, which means that deep tech companies are often undervalued. Small businesses can’t meet all of their needs. Research from the World Bank has shown that to survive, start-ups need to be embedded within an innovation ecosystem; a network of people from universities, government, professional services, community groups, and investment firms.

Incubators are at the centre of innovation ecosystems, acting as the magnets that draw together the different resources that deep tech start-ups need. A 2019 Nesta report found that 73% of start-ups consider incubators ‘vital or significant to their success’.

SCV is thrilled to announce Nebu~Flow as the latest addition to the portfolio - a company with patented technology that could transform inhalation therapies and improve quality of life for millions living with respiratory diseases.
Read More
02/15/2022

Science Creates Ventures backs the latest in rapid diagnostics, partnering on a £2.6m raise for OxDX.

The team at Science Creates Ventures have kick-started 2022 by confirming an investment into OxDX, a Oxford University spin out.
Read More
01/20/2022

The inside story of GM Scientific, from the first days to its sale, from pioneering founder Maria Dugdale.
Read More
01/06/2022

Imophoron is a small company with a huge vision - to create a brand new class of thermostable vaccines. Meet its founder Frédéric Garzoni.
Read More